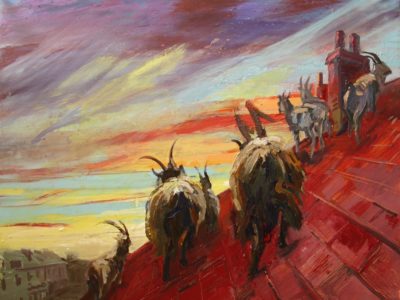 Alan’s art training got off to a late start following a couple of years as an apprentice engineer when he left school. After deciding that the creative spark couldn’t be ignored he moved on from the apprenticeship to study at Eastbourne College of Art, then Goldsmiths College of Art and finally Jacob Kramer College. After graduating Alan travelled extensively and worked as a joiner and sign writer alongside his own artistic practice, which he says, ”gave me a broad view of the world and, more importantly, how working as an artist, I could fit into it.” Alan’s main art practice involves painting and sculpture, but since graduating he has done a wealth of work in schools and community settings.   For anyone familiar with Leeds, an example of his public artwork can be found on Chapeltown Road, with others dotted around the northern region, often these pieces are 3D sculpture or bright mosaics. He has worked in numerous schools with children of all ages, providing pupils with experiences they may not have had before.   Many of these experiences have involved facilitating and supporting children to explore their own creativity, encourage their own ideas, and support them to create something amazing.   “It’s always great after a workshop in a school to hear the staff say that they didn’t realise that the results were going to be that good!” When Alan was in school, he didn’t come across anyone who was making a living as a practicing artist, so this is one of the reasons why he sees it as important that artists work in schools: “they get the chance to meet an artist and to find out about what it’s like being an artist, which will possibly give them a role model for the future. This is something that I could have done with when I was going through education.”

After many years working in 3D, Alan has recently picked up his paintbrush and has created a number of paintings which reflect and explore the personal experiences he has had over the past few years, what he sees in Leeds and the world around him. This work has been exhibited in galleries in Leeds and Halifax. To see more examples of Alan’s work, please visit his website.