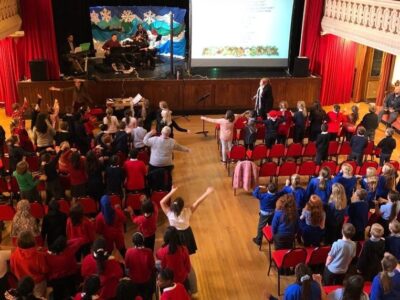 During December; after 18 months of restrictions, it was wonderful to finally be able to run live seasonal Christmas concerts and singing days.

The Town Hall is currently closed for two years for renovations so over 500 Children from around the city gathered at both Pudsey Civic Hall and Morley Town Hall over 4 days. They came to The Leeds Schools’ Music Association (LSMA) Christmas Singalong and the ArtForms Special Needs Singalong. One pupil at the LSMA said ‘It was the best day at school, ever!’ and many staff commented on how much their children needed these activities at the end of such a difficult year. The Lord Mayor of Morley dropped in to thank the children for their wonderful singing and there was a special visit from Father Christmas at the SEND singalong.

The LMEP partner YAMSEN:SpeciallyMusic also held their annual Christmas concert at Pudsey which included a visit from the Lord Mayor of Leeds. The theme of the day was togetherness, which brought home how long it had been since everyone had played music and sung together in the same room.

Next Event – Save the date!

The CLYM Prom will be held at Pudsey Civic Hall on the afternoon of Tuesday 22nd March.