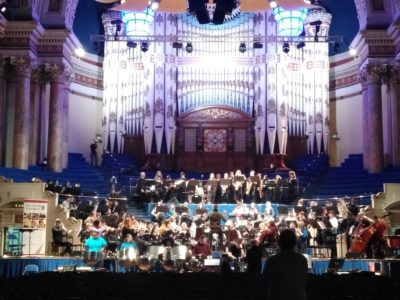 This year’s City of Leeds Youth Music Prom took place at Leeds Town Hall on Tuesday 3rd March 2020 and was a resounding success!

The Town Hall was filled with over one thousand pupils from every corner of Leeds, along with their teachers and school staff, and VIPs from both Leeds City Council and our Leeds Music Education Partnership partner organisations who are also involved in bringing a variety of musical experiences and learning to the city.

The 90-minute performance featured the City of Leeds Youth Wind Orchestra, Roots Alive, Leeds Silver Steel Sparrows, LYJRO and City of Leeds Youth Orchestra, playing everything from well-known pieces such as ‘Happy’ and ‘The Lion King’, to the incredible ending of Shostakovich’s Leningrad Symphony, to pieces that the young musicians had arranged themselves. It was a magnificent musical medley from some of Leeds’ best young musicians and a truly enjoyable experience for those of all ages in the audience.

For some of the pupils attending, this was their first experience of live music, and many of the children commented that it was inspiring to see those only a few years older than themselves playing instruments they recognised on the stage of such a grand venue. Many of the conductors on stage also teach in schools during the week, and some teachers mentioned that this caused great excitement amongst their pupils, as well as being an inspiration to practise and aim high.

Two schools wrote to tell us that their pupils had described it as “the best trip to town” and “the best school trip ever” – we completely agree! Well done to all those who took part – you should be very proud of yourselves for this fantastic event.