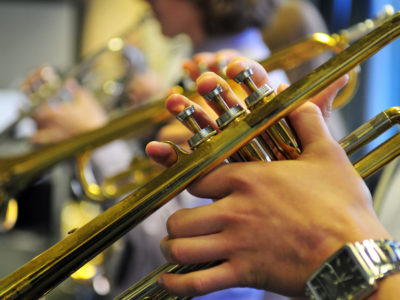 On March 22nd the third ArtForms Violet Night was held. The event is dedicated to promoting small scale acoustic music making. Groups are undirected and so highly developed communicative skills between performers are normally in evidence. This night was no exception, and we witnessed amazingly high levels of musical skills in groups from Primrose Lane Primary, Wetherby Music Centre, Co-op Academy and Pudsey Priesthorpe Co-op Academy. Music was wide ranging, with many different genres and instruments represented. However, what all groups demonstrated was acute listening, sensitivity and courage, with performers leading and following as appropriate. It was also wonderful to hear an original composition from one of the singers from Priesthorpe Co-op Academy.

The evening was warm and friendly, avoiding the cut throat nature of X Factor type events, or the urge for the performers to be the highest, fastest or loudest. However, a prize was given for the best communicators of the evening and this was awarded to the singers from Co-op Academy: Franklyna, Giulia and Cody.

Roots Alive performed in the second half. This is the City of Leeds Youth Music Folk Group. The group has a high reputation, with four of its members belonging to the National Youth Folk Ensemble. The group lived up to its reputation, finishing the evening off with its exciting contemporary arrangements of original folk material, and several own compositions. The set was over 30 minutes, with all music performed from memory. Performers thrilled with their ability to both rouse audiences with exciting dances, and to move them to tears with plaintive songs.

Well done to all who took part!