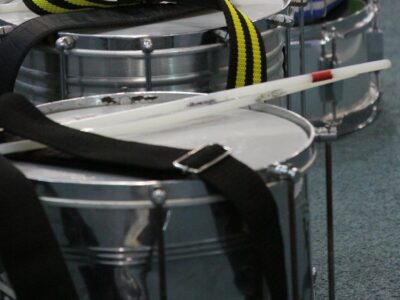 Back in January, staff from all eight schools attended a CPD Samba Workshop at the ArtForms base in Pudsey Civic Hall.  The session was led by our partners Louder Than Life – who taught the staff how to use the instruments and how to play three Samba grooves.  At this session staff also collected their Samba Kits to take back to their schools, provided by ArtForms specifically for the project.

For those of you who don’t know, Samba is a form of Music for untuned percussion that originates from Brazil.  Like Brazillian football, Samba Music has a degree of flare and joy that encourages movement and dance, particularly when you are playing it.

Our Samba Kits contain Surdos or bass drums, Agogo Bells, Tamborims (tambourines without bells on hit with a whipping stick to create a wonderful loud cracking sound), and Ganza or shakers.  Two kits provide enough instruments for a full class of 30.

The project is a wonderful way of encouraging and inspiring staff who are mostly non-specialist Music teachers, to step out of their comfort zone, learn new skills and teach a completely new style of Music.  The grooves that staff learned at Pudsey started at a basic level but progressed to a good level of challenge for both staff and the children they were intended to be taught to.

The staff were tasked with taking their newly acquired Samba skills back to schools to teach the children and to rehearse for the big performance event.  This was brilliantly supported by a full set of YouTube videos produced by Tim Brain and Dave Mitchell of Louder Than Life, with each part clearly broken down, so that staff could use them for reference or to support the delivery.

The event took place on the last day of term at Pudsey Civic Hall involving over 400 children in two sessions.

Our evaluations show that 100% of the staff who took part have developed new Music teaching skills and feel that their confidence to teach Music has improved as a result of this project.  Here’s a sample of what they had to say –

Mass participation with no pressure for low ability. Chance for children to experience performing in a very safe supportive environment. Even the ‘basic’ hip hop beat gave a chance for all to succeed. The quality, manner and enthusiasm of Big Samba staff was fantastic.  Aidan Harington – Stanningley Primary.

This year we are experimenting with putting on two Big Samba events due to an increase in demand from schools.  This year’s Big Samba 2 is on the following dates –

There are spaces for up to 20 schools to take part in this event depending on children numbers from each school.  If you would like your school to be involved please let us know as soon as possible.  We are operating a first come, first serve, policy.  To sign up please email Sam Mercer at sam.mercer@leeds.gov.uk and state the year group and number of children you would like to include as well as your preference for the morning or afternoon session on 11th July.